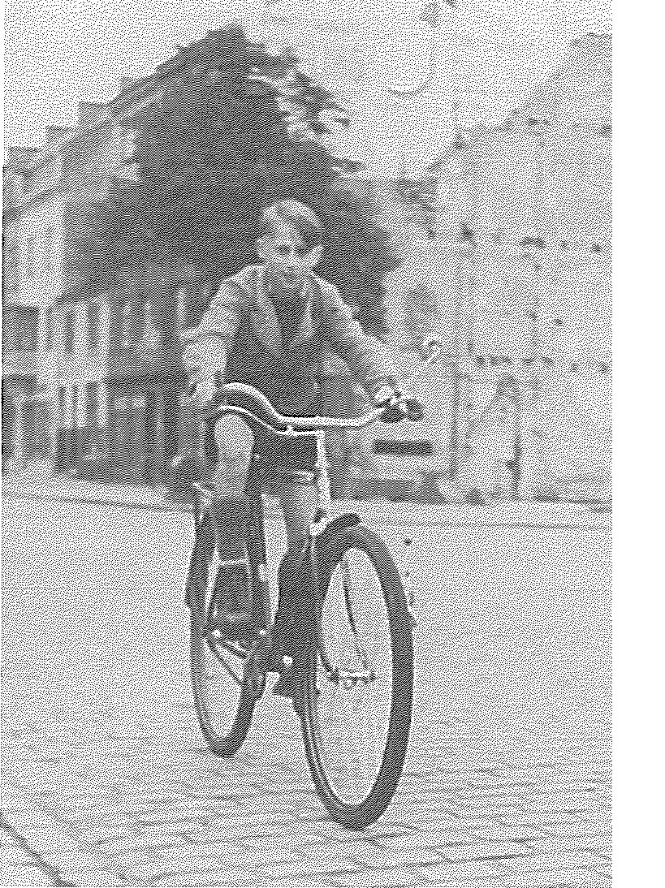 I, Manfred Schulmeister, was born on 11th September 1937 in Bremen, North West Germany. In 1939, the Second World War started. In 1940, my mother Elly Henriette Schulmeister and my father Anton Karl Schulmeister had another son, Günther Karl. Soon thereafter, my father was called up to fight in North Africa, while my mother was called to the north of Germany for duty on the telephones in the war.

My brother and I were living with our grandparents, Anna and August Rueckbrodt in the Hemmstraße in Bremen. The war, as always, was doing plenty of harm to the fighting men on each side, but also to the ordinary people and children on both sides, as we all know by now.

For many years, we all had to sleep in our overcoats to be ready to get into nearby bunkers when the sirens started; to let us know that we needed to get underground until the air raids were over. Many times we came out to see some houses destroyed and burning. For us kids, it became normal to be woken up in the middle of the night to find shelter across the road.

I do remember the day very clearly when a German soldier came to our door. (I was about 20 metres away.) I could see on their faces that it was not good news. I knew somehow that my father had been killed in the war. I was able to find out just a few years ago, while in Australia with the aid of a computer and the internet, that he was wounded in Africa and died on a hospital ship on the way to Italy. His grave site is in Bari, on the eastern side of Italy.

We never had the chance to go to kindergarten. It was not easy for people in those war years to do much besides waiting for the bombs to fall around us, while at the same time the young men and women on both sides gave their lives for their countries.

In 1943, I was ready to start my schooling in Bremen, but just then the bombs partly destroyed the school buildings. There were two schools, with a playground in between them. Now I had to wait another year before I could start my schooling.

I remember how in 1944, the sirens went off again in the dark of night, but this time the whole sky was lit up with floating lights as markers for the bombers to drop their loads over us. I have only recently found out that this was done with lights hanging on slow release balloons, according to an ABC television documentary.

This was the time when my grandfather told us not to go into the bunker across the road, but into a five-storey one about a mile away from our home near the Hemmstraße. My grandmother, Günther and I finally got to this bunker and found a seat each on the third storey.

We were in this place for three days and two nights – three days of being bombed. Phosphorus bombs about 16 inches long and two inches wide were dropped on us, burning the outside of the bunker. Large conventional bombs were also dropped all over our lovely city and on our bunker. Some people were killed in the top (fifth) storey of the bunker, as the cement ceiling fell on them. How lucky we were to get through all that, thanks to my grandfather’s foresight. But where was he?

At last, after three days of the bombing of Bremen, it finally was over. Slowly all the people made their way out of this hellhole, only to see the damage outside. Everything was destroyed. I don’t want to go into it in detail, as it was not a pretty sight, with bodies here and there.

The three of us left our bunker to find our way back to our street – it was about a mile or so to walk. We walked past apartment buildings and homes which were destroyed and most still burning; some were about to collapse. We had to get back to our home in Hemmstraße.

As we came closer, we heard people say that the whole city had been wiped out, including our street. Yes, there was no home left – like so many others, it was flat to the ground. All that we had left was what we were wearing, with the exception of a block of land with a small hut in 31 Meyersweg, in Bremen Walle near the Autobahn.

At this time, we were again thinking about our grandfather. Just on the end of our street there was a vacant space next to the main road, where they had put the dead in rows for identification. There would have been 800 or 900 people – maybe more – men, women and children.

My grandmother, Günther and I started to walk along these rows of bodies, searching for my Opa, but a policeman told off my Oma for taking kids through there. He made us stand to the side so my grandma had to look for my grandpa on her own (what a sick joke). We kids were still amongst all those dead bodies. Anyway, she did not find him there.

As we left the scene, we came across a lady and asked her if she had seen our grandpa. “Yes, I believe he spent his time near the Autobahn”, she told us. He knew somehow that they would not bomb the Autobahn, as they might need it for themselves in future. We walked a few miles to our little block and found him there at last. The block itself was only about a kilometre from the nearest point of the Autobahn. What a relief – he was alive!

After a few days, we went back to the ruins of our house to clean the mortar off the bricks and stack them up. Other people who had lost their homes did the same. We then used a small cart to take those bricks to our block at Meyersweg 31. It was a good few kilometres to walk. My grandpa built our home there, where we lived until Günther and I moved to Australia in 1954.

The war was still going on for a few more weeks. I remember that the bombs were dropping all around us. The first thing we were taught was to get down low. On one occasion, I did this right next to a brush fence. Just above my head I heard a noise. A fragment of shrapnel came flying an inch above my head (through the brush) and buried itself 15 feet away on the other side of the dirt track from where I was. I dug this nine inch long and two inch wide piece of hot silver shrapnel out of the ground. I cannot remember what I did with it. That was one of many close calls for me, but I was lucky enough to survive it.

Bombs were landing even on some farms and killing cattle. Some people went with their little trolleys to collect the meat from those smashed up animals.

What a strange feeling it was for me when an aircraft came flying over us without dropping bombs. Even then, I was still doubtful and in two minds about whether to seek shelter.

In 1945, the war was finally over and life started to be normal and peaceful. It is sad that after all these wars, we humans have still not learned anything. It is still going on all over the world, and always will. These days we don’t even know who the enemy is.

Günther and I were called to go to Australia in 1954. It was a sad day when we left Meyersweg 31. I can still see my Oma, who walked us to the front gate – I could see the sadness in her eyes, as only she would have known that she would never see us again. Many years later, I can still see her and understand what it really meant to her.

My Auntie Hertha and my grandpa walked us to the train station in Bremen to go to Bremerhaven. To my surprise, my grandfather suddenly stopped in his tracks about a block from the ship. There he was – a hard man who had gone through so much – in tears, but not wanting us to see him like that. But I did see him like that for the first time.

My auntie took us to the ship (SS Seven Seas) and fixed up some papers. That was the end of our lives in Germany.

The full, unedited version of Manfred's story is available from the Peace Works! website at: www.peaceworks.org.au 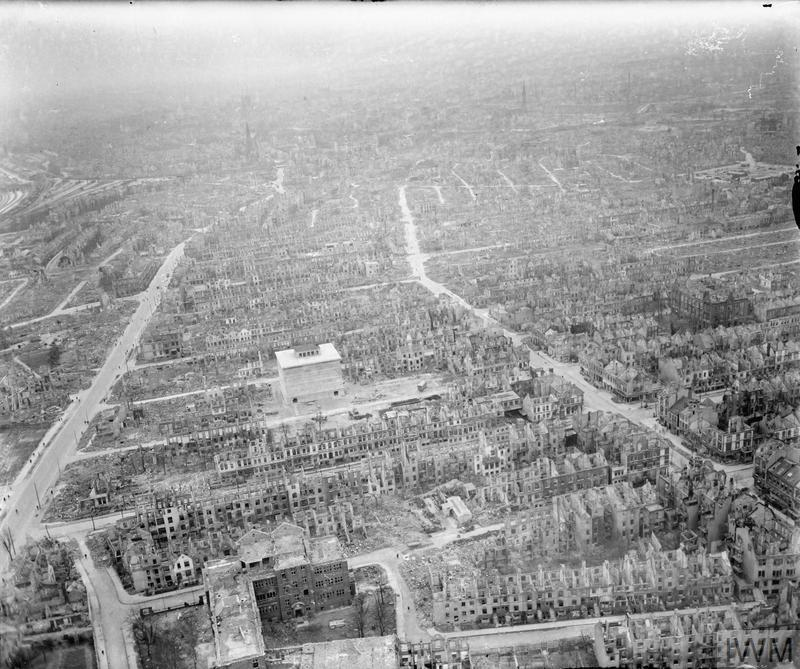 At the time the picture was taken Manfred, his brother Günther and his grandmother would have been inside – after three days on the 3rd floor they came out to the devastation of all the city’s buildings.
File: Bremen, Royal Air Force Bomber Command, 1942-1945 CL3259, JPG