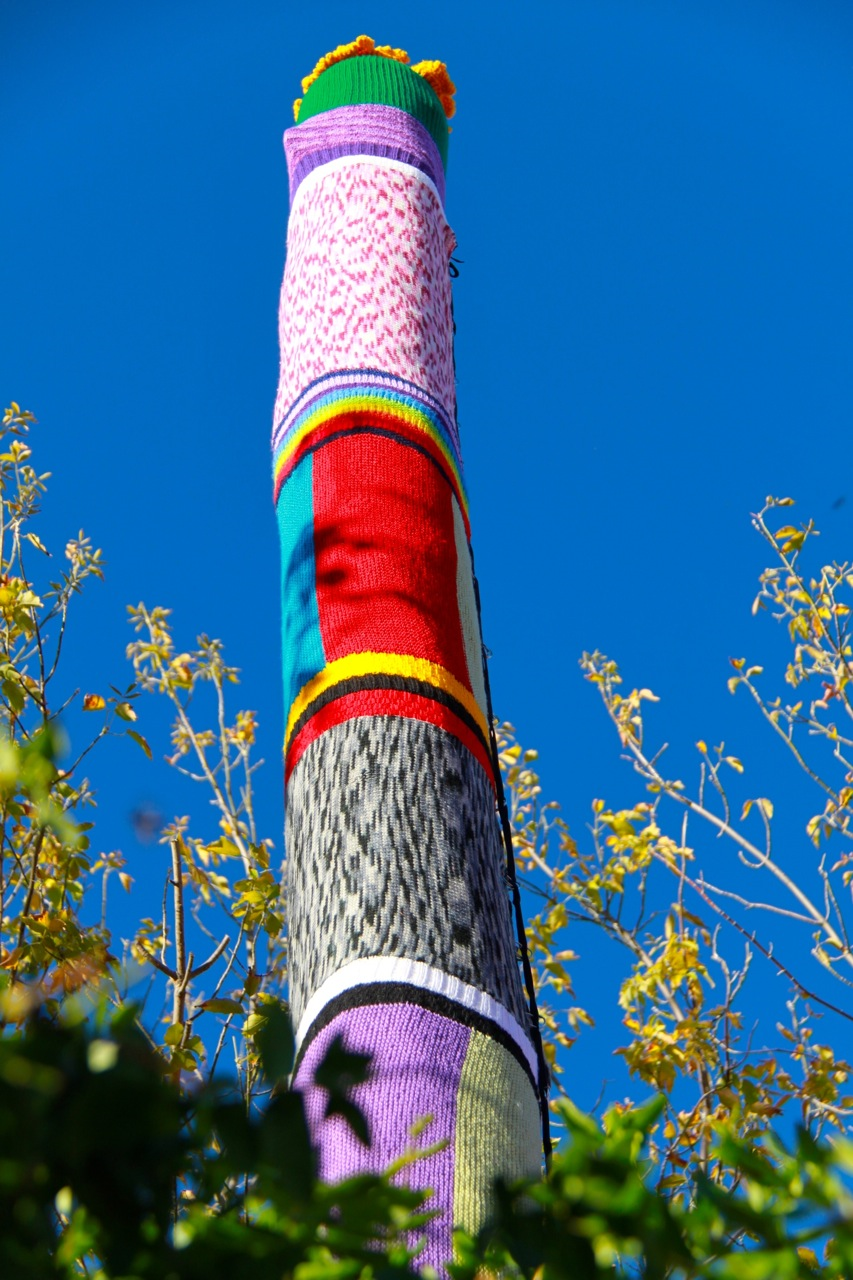 Lone Pine Pole Cosy
Knitted by a team of PeaceKnits volunteers, with Jeane Bicket making a major contribution.
It was erected by electrician Celia Balfour of Hydro Electrics.

I recently read an essay recounting the history of the many women and girls who knitted socks for soldiers fighting in the “Great War.” Its publication, close to the centenary of the Gallipoli landing, coincided with other activities in Australia commemorating that event. One of these activities included women and men, calling themselves PeaceKnits, who wanted to create a different way for Australians to comprehend the impacts of World War 1. They wanted to remember those who gave so much to secure a peace outside the military commemorations.

One inspiration for this was a conference in April 1915 when more than 1100 women from around the world met in The Hague to discuss better ways of securing world peace than they were seeing in the mayhem of trench warfare. Since that Women’s International Congress, 100 years of efforts towards more sustainable peace have been supported through the world’s longest running women’s peace organisation, the Women’s International League for Peace and Freedom.

The PeaceKnits project started in May 2013 in Queanbeyan. The plan was to produce knitted art installations and other craft and written display pieces, representing the impacts of World War 1. Over the next two years members of the group met monthly to talk, write, research and knit. They also helped with and contributed to about 60 community events, various annual show entries, craft and writing workshops. By April 2015 they had produced 42 major pieces. The final PeaceKnits activity was held on 11 April 2015, in a 100 year old cottage garden in Queanbeyan. They called this event a Pop-Up.

To reinforce the link to knitting the group was able to secure, from the Art Gallery of NSW, a full framed reproduction copy of Grace Cossington Smith’s The Sock Knitter. This was Australia’s first ever modernist painting, exhibited in 1915. Grace painted it of her sister knitting socks for soldiers in the family’s garden room at their home in Sydney.

PeaceKnits own KnitArt started by producing a seven and a half metre high Lone Pine Pole Cosy, which has been mounted on an unused utility pole in the cottage garden, and has remained there since the Pop-Up event.

They then knitted 100 cotton wash cloths, similar to those made and sent to the front line soldiers. Since the Pop-Up event, these have been gifted to children in countries affected by conflict.

Young Gen-Ys, new to hand-sewing, were shown how to hand-stitch, patch and quilt 100 potholders, which are now being sold for donations to help ensure that the Women’s International League for Peace and Freedom continues to secure future sustainable peace solutions.

The group did not knit any socks for this project but they did feature a pair made by a Queanbeyan woman who had knitted them as a schoolgirl in 1915, and they shared her story. They also featured an original hand-written “sock recipe” handed down from Dymphna Clark, Manning Clark’s wife. She used the recipe to knit socks during the Second World War.

With members of Kiama Knitters Guild, they made a free-form knit and crochet Blackout Curtain in the design of a “rose window” as a reminder of all the people and the built structures across Europe that had been so damaged from aerial bombing raids in both World Wars. Rather than roses, they fringed the free-form central pieces with a circle of red poppies for remembrance, overlaid with white poppies for peace.

Visitors to the Pop-Up were able to hold a pair of mittens that had been sent by an unknown knitter and received by Bombardier Martin Collins in 1915, on the Western Front. Martin valued the mittens so much, to help him get through the severe European winters in the trenches, that he hand-stitched his initials on the cuff of each mitten. They were returned to his family after his death in 1917, as part of the few personal belongings he kept safely in a compartmentalised flour bag. These mittens were featured on the front cover of the PeaceKnits 2015-2016 Remembrance Calendar, produced with the support of a $3000 grant from the ANZAC Centenary Local Grants.

One of the regular monthly knitters was born in Amsterdam in 1940, spending her preschool years in war-torn occupied Holland. Her story, and that of other Dutch and Belgian women, helped punctuate the group’s monthly chats with the realities of war for families and communities affected by conflict.

PeaceKnits Pop-Up was so successful that Queanbeyan City Council acknowledged their work with a 2015 Heritage Award for contribution to community cultural heritage. PeaceKnits continues to support community writing workshops, including through work being done by Peace Works! publication project (www.peaceworks.org.au) in order to find and record stories that have yet to be heard or understood. 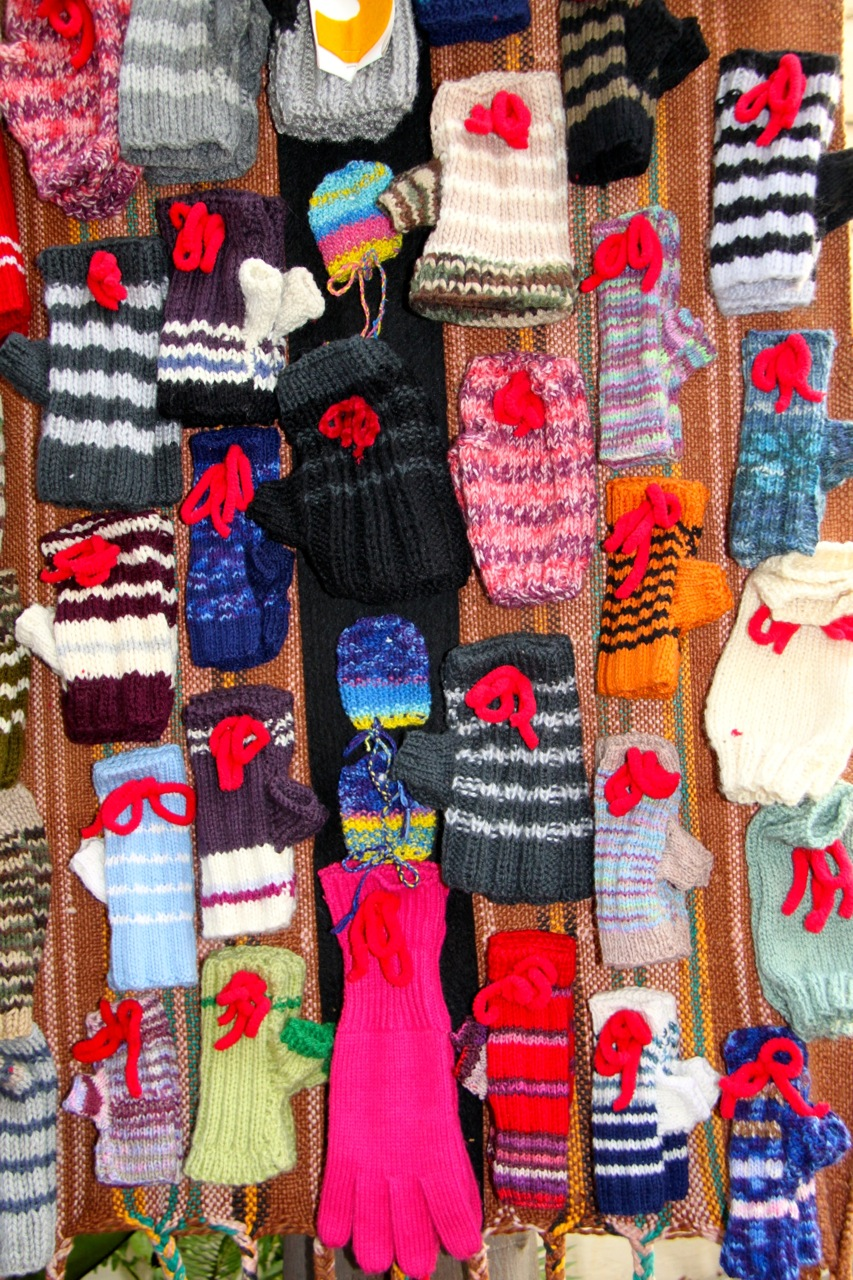 All Hands on Deck
100 pairs of fingerless mittens