The Bun that had to Change its Name 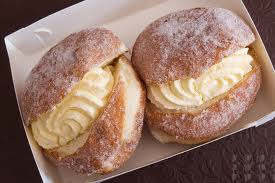 It’s not unusual for people to change their names at different stages of their life. We know of one man, named Calla at birth, who later in life preferred to be known as Charlie. It’s a bit more unusual for food to be forced to change names – though this isn’t surprising in politically charged times of conflict.

In the 19th and 20th centuries, Australia encouraged settlers to come from many countries. In the mid-19th century, many German Lutheran settlers came to Australia to escape religious persecution. With them they brought valuable skills, including their wonderful bakery traditions.

But when the two world wars brought conflict and division across the globe, many who had successfully settled in Australia were stopped from following German traditions. Family names and names of towns were “anglicised.” It was not even allowed for the German language to be spoken.

It was due to times of conflict and distrust affecting Australia that the Berliner Bun was forced to change its name – when it became the “Kitchener Bun.” This wonderful bun, made of soft doughnut texture with crinkly sugar coating, filled with berry jam and fresh cream, was re-labelled with the name of a British army field marshal. How uncomfortable for the bun!

Even today, if you drive around the country towns where German Lutherans settled in Australia, you will still find German bakeries. Many of their baked goods now proudly bear their traditional names – though not the Berliner. For it still goes by the Kitchener Bun label. It’s a pity that this bun still can’t proudly say today: Ich bin ein Berliner! [Pun intended, based on the John F Kennedy legend.]

Writing this story also led me to write this poem:

We live on truisms: Food maketh the man.
An army marches on its stomach.
So it must also be true -
and obvious to those of us
who come from country:
Our "Anzac" basic food helped
diggers survive in trenches.

But "damper" and
"Anzac" biscuits, like
larrikin boys' laconic humours,
predated 1915 by decades.
Our "diggers" learned to survive goldfields
long before warring minefields buried them.

Our "dampers" and oat crispies
were bushie mainstays
long before we used them to
gird our sons in war herds.
In the deep peace of outback country
did stockmen learn from black women
to ground grains and cook in ashes?

It is also a truism that war makes us inventive.
Rather, those who can best invent
survive, perchance to re-invent a peace.