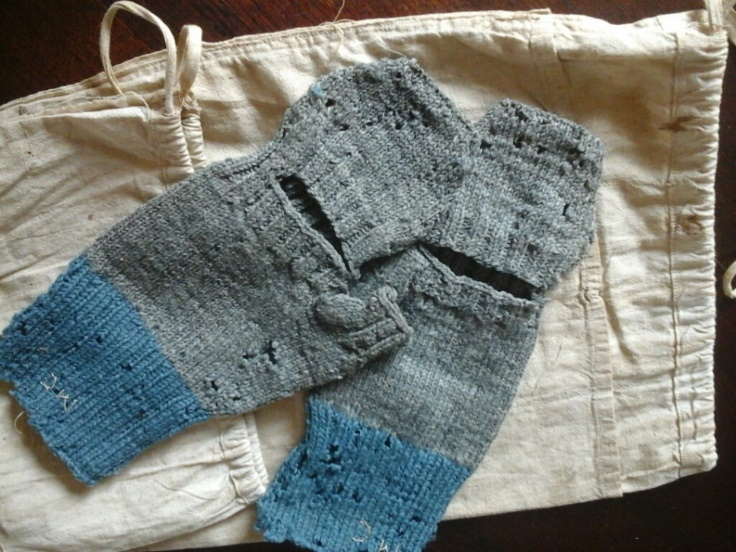 Clariss Collins was a young mother of two small girls, Eileen and Kathleen, when her husband Martin answered the call to defend his country in World War I. Martin’s father had fought in and survived the Boer War and now Martin felt it his duty to fight for his country.

He embarked from Western Australia (WA) as Bombardier Martin Henry Collins 7985 AFA (Australian Field Artillery) Brigade, and was killed in action on 21st September 1917 at the age of 27. He was one of thousands of young men killed in the many battles around Ypres in Belgium. So many of these young men had left young wives with children and many were too young to have even started their own families.

Cemeteries in Belgium and France hold the bodies of many, while many more are remembered on cenotaphs such as the Menin Gate, for they have no marked graves.

This was the story that my mother Eileen used to tell me when she showed me “the parcel” when I was growing up.

Wrapped in brown paper and tied with string “the parcel” contained a body belt made from a flour bag, divided into pockets to hold a soldier’s personal necessities:

And a pair of hand knitted mittens – had they come from home? Were they in a Red Cross parcel? Had Martin stitched his own initials?

Clariss was to sell the Cordial factory that Martin had established in WA and then boarded a ship to Sydney with her two small girls to start a new life, as I imagine so many young women had to do.

She met and married Bert, who was to be the only grandfather I ever knew. Eileen and Kathleen became big sisters to 6 more children.

Eileen married and raised 4 children, my 3 brothers and myself, while Kathleen had 3 children.

Eileen, my mother, treasured “the Parcel” as her only concrete memory of her father and used it to remind my brothers and myself of the futility of war and the need for peace in our world. She told me that her greatest wish had always been to visit Martin’s grave in Ypres. As a teenager I understood that it was highly unlikely, due to her health, that her wish would ever be realised (and it wasn’t). I assured her that if she didn’t go I would make it my mission to go for her.

And so it was, that in 1980, my husband and I set off on a journey that would take us to Belgium to fulfil my promise to my mother.

As we left the train at Ypres it was strangely quiet. We were met by the stationmaster who asked if we were looking for a war grave. He directed us to the office of the British War Graves Commission nearby and we were made most welcome. They directed us to a neighbouring florist and upon our return were waiting with an official car.

As we were driven out of the township it became clear to me that, without these folk, my search would have been extremely difficult.

On either side of the road were endless rows of white headstones interrupted only by gates and entrances. Suddenly the driver turned confidently into an entrance, navigated his way to the middle of a huge section, and our guide indicated a row. The guide took us directly to Martin’s grave but I thought he had made a mistake, for on the grave lay a small bunch of flowers. They were freshly picked wild flowers or flowers plucked from a cottage garden and as I looked along the rows of graves there were similar posies scattered.

Our guide had returned to the car telling my husband that they would wait for as long as we needed to take.

When we returned to the car I asked the guide about the flowers on my grandfather’s grave. (I even wondered if he had been able to send someone ahead to make this thoughtful gesture.) He told us that the children from the local schools were encouraged to help maintain the countless graves and that some children selected specific graves to tend. I pondered that this young father who died here, never to see his little daughters again, was being remembered and honoured by a new generation of children longing for peace.

Back at the British War Graves Commission Office we were invited to stay for the daily commemorative service at the Menin Gate. As the sun set the street became silent, as shop doors were shut and townspeople moved onto the footpaths and the traffic stopped. A solitary bugle sounded and a very simple but profound tribute was made to all who had made the supreme sacrifice, particularly to the 6160 Australians who have no marked graves but whose names are engraved on the ramparts of the Menin Gate. These people were paying their respects to strangers whose goal it had been to bring their country peace.

The return train journey to Brussels gave much time for reflection. Contemplation and attempts to unravel the tangled emotions of sadness at the futility of war, and gratitude at fulfilling my mother’s wishes, overwhelmed me.

As I now recall memories of the past my thoughts turn to dreams of the future. As well as being a mother in these centenary years I am a grandmother and a great grandmother. My hope is that my legacy to all these generations in an ever evolving world is of our need to strive for peace.

For peace to live in our world it must first live in our hearts. While we must never forget those who fought for peace we must also remember that, as we now strive and yearn for peace, we must find other ways to achieve it.

Note from PeaceKnits: Martin Collins and his Mittens

Bmdr Martin Henry Collins 7985 AFA Brigade (Australian Field Artillery) was killed in action on 21st September 1917 at the age of 27. In this phase of the Ypres Salient, the “Battle of the Menin Road”, there were heavy losses from Australian Divisions. Many of these young men were buried in one of the numerous cemeteries which now surround Ypres while 6160 Australians are remembered on the Menin Gate as those who have no marked graves.

Martin had left his wife Clariss and their two small daughters, Eileen and Kathleen, to fight alongside the many gallant young men. When Martin’s belongings were returned to Clariss the flour bag parcel contained these mittens. I like to think that he received them in a parcel from a kind knitter and that he somehow managed to find the cotton to “embroider” his initials on them.