The Boys from Blackboy Hill

Private Charles Frederick Litton (Sandberg), SERN (Serial Number) 83, 16th Battalion (Bn), AIF was a Blackboy Hill boy, one of 32,231. The place name was derived from the endemic vegetation at the newly developed military depot in the hills east of Perth. There, on the gravelly soils, the grass tree xanthorrhoea pressie thrives. Its spectacular flower spike is a single ‘spear’ growing to two metres or so – the perfect symbol for an army training camp.

In the early twentieth century, the newly-federated Commonwealth noted growing international political problems and began setting up military camps that could supply trained combat troops in the event of conflict. Blackboy Hill Camp had good rail connections to Perth/Fremantle and to Kalgoorlie and the east coast via the burgeoning Transcontinental Railway.

The camp was commissioned on 17th August 1914, just eleven days after Britain declared war on Germany. The first enlistees were all volunteers for overseas service. In the early days, the army bureaucracy focussed on forming the First Battalion of the AIF and bringing the camp to operational order. The men erected their accommodation tents in neat rows, set up a Post Office and built a separate cookhouse/mess under canvas. Facilities might have been poor, but nevertheless, morale was high.

A camp ditty of that time (later recorded in the Western Mail) went:

“I’d love to live in Blackboy for a week or two,
And work all day, and get no pay,
And live on Irish stew.”

Fred enlisted at Fremantle on 12th September 1914, aged 22. He must have been keen because the Service No. issued was less than 100! He stated that he was a boat builder and claimed a prior service record based on four years in the Fremantle Senior Cadets. Ever resourceful, Fred enlisted using “Litton” as his surname rather than his birth name of “Sandberg” – perhaps he thought this sounded too ‘Germanic’. The tag “Litton” was, in fact, the name of the family that cared for him after his Mother’s untimely death in 1901.

Enlistees from Perth/Fremantle travelled to Helena Vale by train and then were marched to the camp. Fred Litton entered Blackboy Hill Camp on 10th October 1914 and had his medical exam the same day. On 16th October, Fred’s oath was taken and attestation certified at Helena Vale by Lieutenant Colonel Howard Pope, the Company Commanding Officer (CO). Fred was not to know that an obscure but important hill at Gallipoli was to be named after his CO. He was duly assigned to “C” Company (Coy) on the 16th October. Camp life involved nonstop days of marching, drilling, weapons handling and night training, beside more menial kitchen duty.

The 16th Bn was formed in two distinct segments – five companies came from Blackboy Hill and three companies were raised in South Australia. Planned transport to the European war zone called for ships, which were to sail in convoy from Albany to Alexandria. The South Australian contingent left the Morphettville station for Melbourne at 3.30pm, Sunday 22nd November 1914. The boys from Blackboy Hill were to proceed to Melbourne by coastal steamer and integrate into a full-strength Unit before their final embarkation.

In November 1914, sections of the 16th Bn at Blackboy Hill were railed to Fremantle in appropriate groupings to meet embarkation and shipping plans. “E” Coy sailed in the SS Dimboola on 18th November, carrying 130 souls of all ranks. A few days later, on Saturday 21st November, “A”, “B” and “C” Coys and most of the Headquarters (HQ) unit, embarked on the SS Indarra, 350 souls of all ranks. Finally, the SS Katoomba departed on 27th November with “D” Coy, a machine gun section and the rest of the HQ unit.

Without a doubt, Fred’s nineteen year old sister, Ruby May, knew that her big brother was about to be shipped out and not surprisingly, she (and many others) were quayside on that day. The narrative buried in our family history has Ruby on the wharf, and Fred leaning over the side of the ship, tossing a coin to her on the dock. I can just imagine the scene: the coin spinning and glistening in the sunlight, Ruby bobbing hither and thither trying to locate the memento, Fred wildly waving his slouch hat to encourage her.

It was indeed a miracle that the coin did not fall between the planks of the dock or otherwise finish up in the drink. Someone, however, ensured that the coin reached its target and Ruby soon had it in her hand – a silver florin of exquisite design. The coin, a Queen Victoria “Golden Jubilee” florin, was carved as a brooch, the remaining metal embossed with the letters R M S – initials for Ruby May Sandberg. What did Ruby do? I dare say she promptly burst into tears. It was the last time they were to see each other.

When the three ships reached Melbourne, the WA contingent merged with the South Australians to form the full 16th Bn for the first time. The men settled into camp at Broadmeadows and drilled, trained, manoeuvred and marched until they were pleading for shipment to Europe. Eventually, on Thursday 17th December, the 16th Bn. put on a show-march through Melbourne and boarded HMAT Ceramic A40 on 22nd December 1914. At the time, the Ceramic was the biggest liner on the Britain-Australia run and she was also fast – 15 knots at least. She slipped into King George Sound at 6am on the 28th December to join a large convoy. There was no shore leave. The flotilla sailed for Egypt on 31st December, the Ceramic weighing anchor at 8am.

At 8.30am on 1st February 1915, the Ceramic reached Alexandria and anchored off-shore until the morning of February 3rd when she berthed at 11am. The men disembarked and felt solid ground for the first time in six weeks. The 16th Bn. was railed to Cairo and after the seven -hour train journey, the troops were marched two miles to Heliopolis where their training camp was located. There followed several weeks of marching, drilling, weapon handling, bayonet practice and trenching. By early-mid April, the men knew that action was imminent.

On 11th April 1915, the battalion left Heliopolis by train for Alexandria. Fred’s “C” Coy boarded the transport HMAT Seang Bee and eventually reached the Greek isle of Lemnos. In mid-April, the character of their daytime training sessions changed; on the 17th/18th/19th of April they practised beach landings. On 24th April, ‘last letters’ was called and they were ominously issued their final piece of field equipment – one pick or shovel per man. The 16th Bn landed at Anzac Cove beach about 6pm on 25th April 1915. There was fierce fighting at the beachhead on the 26th and on the 27th “C” Coy fought to Quinn’s Post/Pope’s Hill ridge. It was here that his mates saw Fred for the last time.

In the 127 days between 22nd December 1914 (the date that the Ceramic left Melbourne) and 27th April 1915, Fred was employed and paid by the AIF. The pay rate was 5/- per diem with a deferred pay of 1/- per diem. His total earnings from the army was £38/2/-, which translates to about $76.20 in today’s decimal currency. Of all the medals, plaques, citations and scrolls that arose from this melancholy episode, none could be more valuable than the hand-made two-bob brooch that Fred flicked to his sister at Fremantle dock in November 1914.

Although he was my uncle, I never met Fred just as he never met his youngest sister, my mother. But that’s a tale for another time and another place; this is the story of Private Frederick Litton, SERN 83, 16th Bn, AIF. It finishes with the details of his service record – SERN and his name at the top of the page, followed by a complete blank except for a single entry at the bottom: 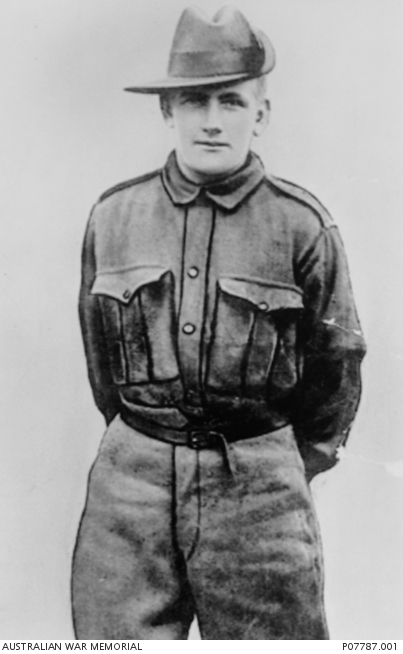