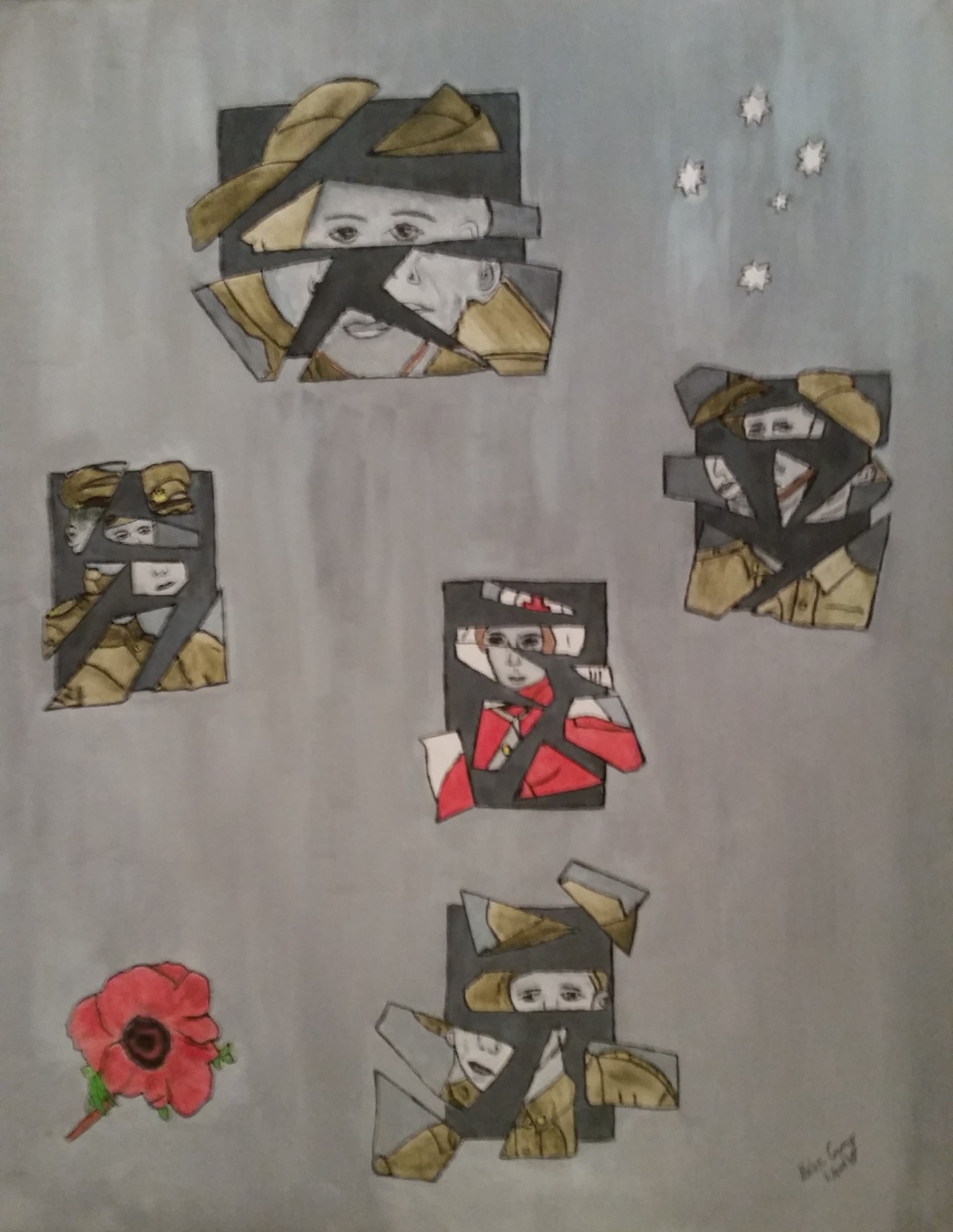 This Peace Works art was inspired by Lee Kernaghan’s “Spirit of the Anzacs.” He speaks of sons and daughters “born beneath the Southern Cross.” They are one with us. I researched men and women who were soldiers and nurses. The images are based on Australians who gave up their peace, and often their life, to secure peace for our country and the world.

Centre: Sister Sarah Melanie De Mestre (1877-1961) from Greenwell Point, NSW, was one of the first nurses to care for casualties of Gallipoli. She served on hospital ships in Rabaul and Suva, and on Lemnos, at the 3rd Australian General Hospital, which had 1040 beds for Gallipoli casualties. She continued her work at close of the offensive when the hospital moved to Egypt, and later to England. The final 2 years she served in France at the No.2 General Australian Hospital, at Abbeville, where she was second in charge. On 4 June 1918 she was awarded the 2nd Class Royal Red Cross, which was presented to her by His Majesty King George V at Buckingham Palace.

Centre right: Private Leslie John Langdon of the 11th Infantry Battalion embarked on 22 December 1914 on HMAT Themistocles A32. He was killed in action at Gallipoli on 25 April 1915 aged 29.

Bottom: Private James (Jim) Charles Martin was born on 3 January 1901 and died at Gallipoli on 25 October 1915, and is thought to be the youngest Australian to have died during service at Gallipoli. He served with the 21st Australian Infantry Battalion. He enlisted at age 14 years and 3 months, after his mother reluctantly gave the required written permission, since he had threatened to run away and never write to her again. After training, he departed aboard HMAT Berrima, sailing to Egypt, from where he was deployed to Gallipoli. The transport ship he was aboard was torpedoed by a German submarine, and he and others spent hours in the water before being rescued. On 7 September he was stationed at Wire Gully. Conditions were harsh, and on 15 October he was evacuated to a hospital, suffering from typhoid fever. He had lost half his body weight. Three months short of his 15th birthday he died of heart failure.