This quilt was displayed at the Albert Hall performances of A Passion for Peace in April 2015.

This photo quilt was designed and made at a one day PeaceKnits workshop with Queanbeyan Quilters in December 2014. Robyn McPherson led the group work, did much of the cutting and stitching, and provided technical support for printed images used on the quilt. Logan’s Patchwork Fabrics of Leichhardt provided the 48 Australian indigenous, flora and fauna fabric squares used on the back of the photo quilt. Photos on the front of the quilt were sourced from the Australia History Project that helped to mark in April 2015 the 100th anniversary of the founding of Women’s International League for Peace and Freedom (WILPF). The top three group photos feature early twentieth century WILPF activities in support of peace and disarmament. The bottom five photos feature individual founders of peace women’s league branches in Australia, placed in chronological order (from left to right) on the quilt: 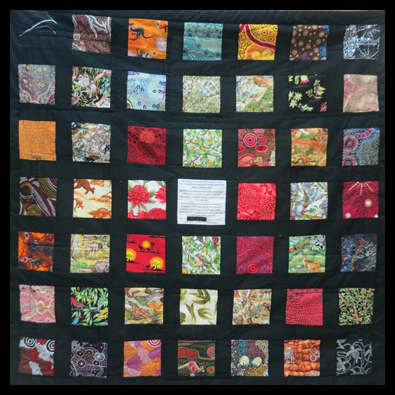