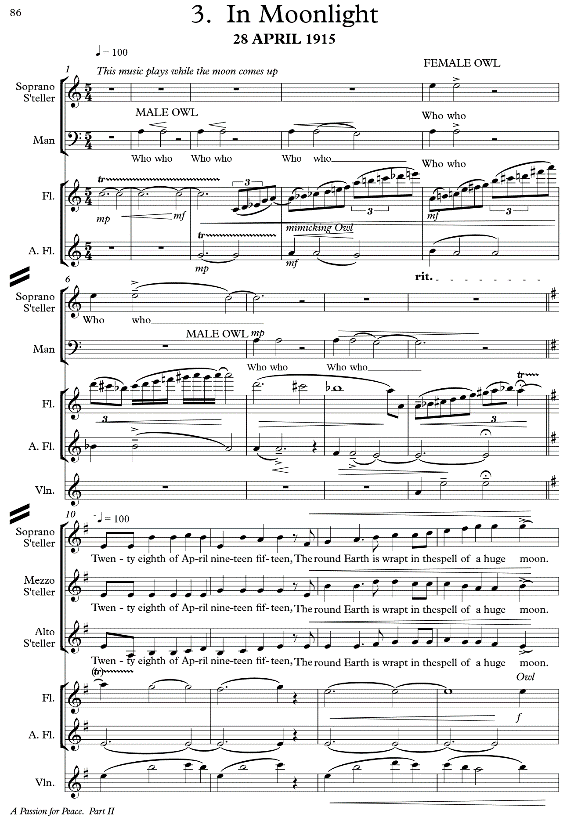 About A Passion for Peace

In April 2015, Glenda Cloughley’s new choral drama A Passion for Peace gave a big Canberra citizens’ voice to the same love of harmony that drew 1300 women together from 12 warring and neutral nations for the only international peace conference of the First World War. Forgotten by military historians but influential and prescient of all the 20th century’s great advances in international human rights law, the 1915 International Congress of Women took place in The Hague during the same week as the Anzac forces' Gallipoli landings.

The 90-minute work is a passion in the same sense as Christians’ traditional Easter passions –– showing how human love, imagination and wisdom can be strong enough to bring renewal, even from the midst of appalling destruction and suffering.

Canberra’s A Chorus of Women presented the world premiere season of A Passion for Peace in Albert Hall for the Congress centenary. With musical direction by Johanna McBride, the Passion cast and production team included some of Canberra’s finest soloists and instrumentalists, a 50-strong Chorus of Women, Arawang Primary School Choir in the role of Children’s Chorus, and the voice and rap beats of Canberra-grown producer-singer-songwriter Danny Pratt.

The Passion season was the centrepiece of a five-day Festival for Peace, also organised by A Chorus of Women. The production was supported financially by: the ACT Arts Fund; the Australian Centre for Christianity and Culture; the New Zealand High Commission; the embassies of Belgium, Denmark, the European Union, Germany, The Netherlands and Sweden; and numerous generous citizens of Canberra. 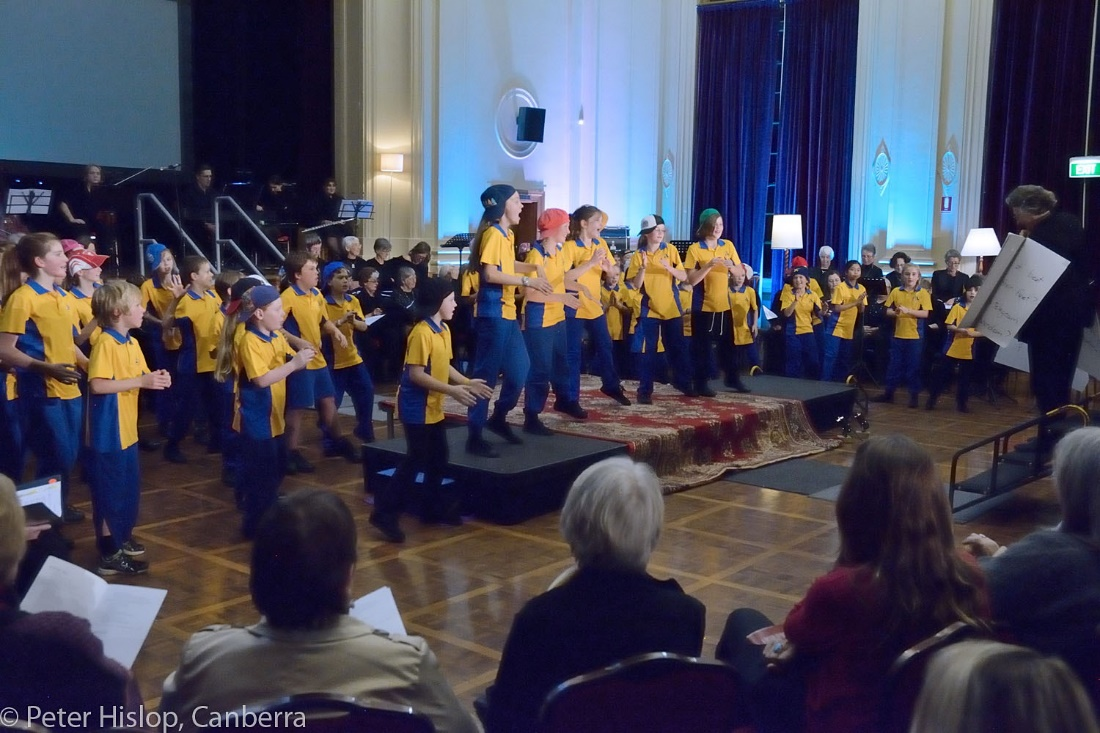 The Children’s Chorus move at full tilt to Danny Pratt's Morse beat in The Telegram Rap, A Passion for Peace, April 2015

This excerpt from the Passion libretto is set on 28 April 1915, the first night of the Congress. Beginning in moonlit country surrounding the two-year-old city of Canberra – a habitat of the Powerful Owl – the poetry opens into a worldwide view as the full moon flies around the Earth. Gallipoli, France, Belgium, the south coast of England and the Dutch capital are all illuminated on the way to the Chorus of Women’s dramatic voicing of the first Congress resolution.

The excerpt includes the names of 24 soldiers who enlisted from the Canberra region, and quotations from the Gallipoli diary of George Cloughley, Glenda’s grandfather from the beautiful town of Riverton on the south coast of New Zealand’s South Island.

Note on Text and Layout

Unvoiced words in the text are singers’ roles and stage directions (shown in italic script), and place and song names (bold text).

These are the three thousand three-day-old dead
Young Turks and Anzacs gone to war
Sons, brothers, husbands who will come home no more

Already in his ears that Traumatime music!
Trying to pour out of his head …

‘There’s much inconvenience
in holding large meetings of political character
so close to the seat of war.’

The opening bars of Resolution One sing softly at a distance 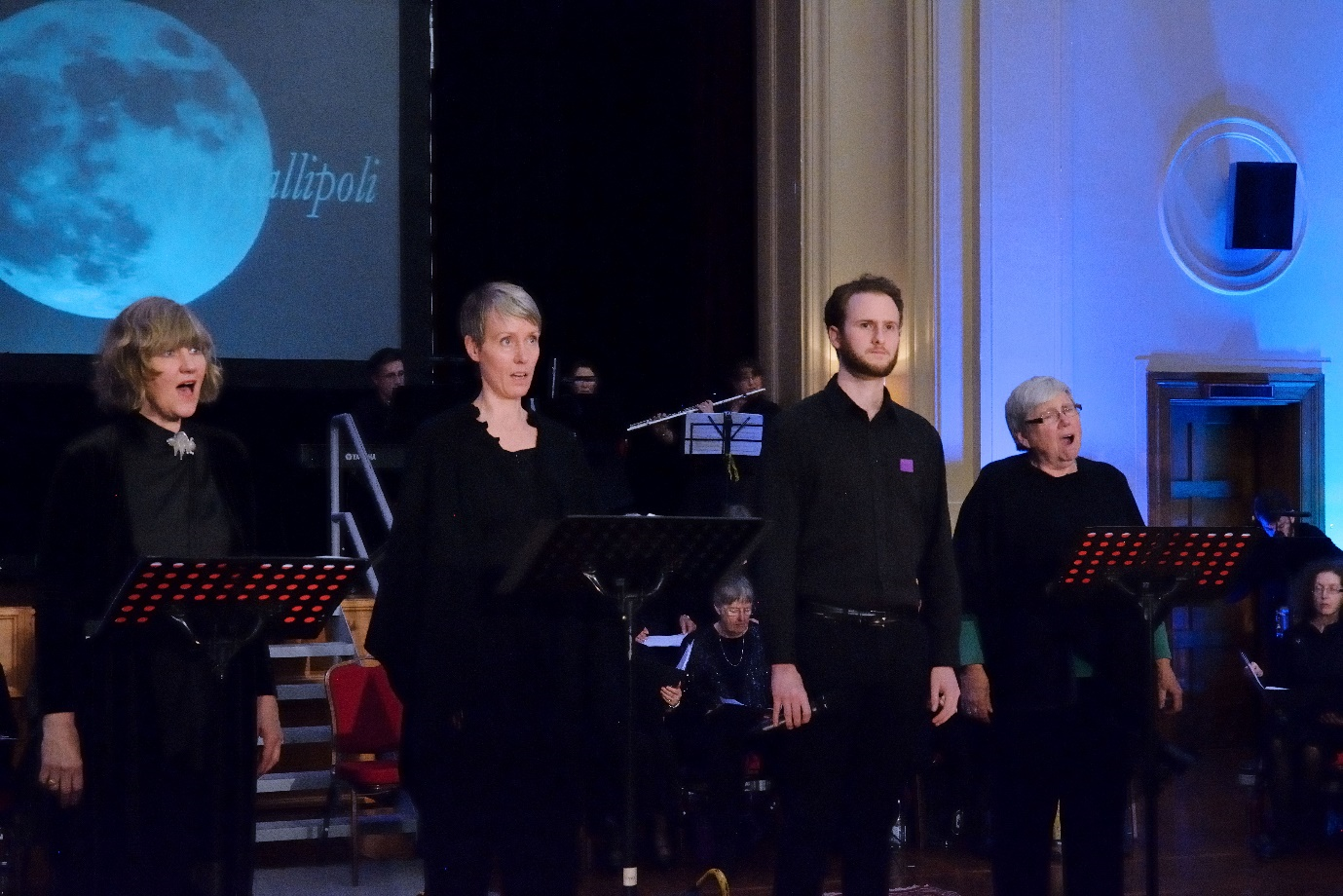 Resolution One
Chorus of Women led by Jane Addams

Now, we women
in international congress assembled
protest against the madness and horror of war
involving as it does
the reckless sacrifice of human life
and the destruction of so much –– so much
that humanity has labored through centuries
to build up

1. An April 2015 premiere season live performance recording of Resolution One can be viewed at youtu.be/dA0iE1OLU_8

2. A Passion for Peace was live webcast and an entire performance, including ‘In Moonlight’, can be viewed via www.chorusofwomen.org

3. Glenda’s Centennial Fanfare ‘We Women are a WILPF’, recorded by A Chorus of Women, can be viewed as broadcast into the 2015 Centennial Congress of the Women’s International League for Peace and Freedom in The Hague at www.youtube.com/watch?v=ab7jC8gNTFk&feature=youtu.be