Martin Collins and his WW1 Mittens 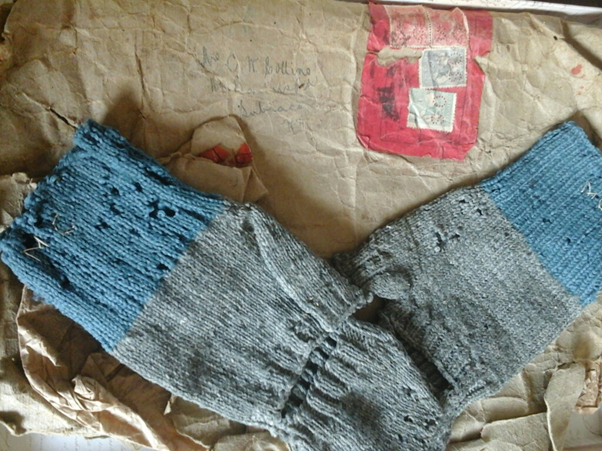 Bombardier Martin Henry Collins 7985 A.F.A. Brigade Australian Field Artillery was killed in action on 21st September 1917 at the age of 27. In this phase of the Ypres Salient, the "Battle of the Menin Road", there were heavy losses from Australian Divisions. Many of these young men were buried in one of the numerous cemeteries which now surround Ypres while 6,160 Australians are remembered on the Menin Gate as those who have no marked graves.

Martin had left his wife Clariss and their two small daughters, Eileen and Kathleen, to fight alongside the many gallant young men. When Martin's belongings were returned to Clariss the flour bag parcel contained these mittens. I like to think that he received them in a parcel from a kind knitter and that he somehow managed to find the cotton to "embroider" his initials on them.

Lesley East is the daughter of Eileen.